What Are Anxiety Attack Symptoms?

In high school, I sat next to a girl on my cheerleading team on our bus ride home from a competition. To my confusion and dismay, I watched as she hyperventilated and started crying uncontrollably.

There was no obvious reason as to why she was suddenly acting this way. She seemed out of control, panicked and scared. For my teammates and I who didn’t grasp what was happening, it was a jolting thing to see. Our peer couldn’t put into words, between her gasps for air, what had upset her. Luckily, my coach knew what was happening, even while the rest of us girls didn’t, and sat next to her, encouraging her to breathe and repeatedly telling her everything was fine.

This was my first encounter with a panic attack.

Since then, and after learning what anxiety and panic attacks are, I have known many people whose anxiety has gotten the best of them and have experienced such attacks myself.

They are crippling, terrifying, and nearly unexplainable.

For someone who is experiencing a panic attack, what can help them most is when the people they love or surround themselves with know what is happening and can act. To avoid being like myself and my fellow cheerleaders who sat by, terrified at what was happening to our beloved friend and feeling helpless, join me as I explore what exactly a panic attack is, how to know what they look like and how to help someone who is having one.

What is a panic attack?

Panic attacks are caused when an anxiety sufferer is feeling especially overwhelmed or triggered. Their body’s way of releasing that overload of negative emotions is through an attack, which can display itself in many ways and be caused by any number of things.

According to the Anxiety and Depression Association of America, the definition of a panic attack is, “the abrupt onset of intense fear or discomfort that reaches a peak within minutes.”

The definition then goes on to list symptoms, saying at least four of them must be present for an event to be categorized as an actual panic attack. On the list are the following:

The above sounds overwhelming, but it’s important for anyone suffering from panic attacks to know that these feelings aren’t uncommon. In fact, according to Psychology Today, one in 75 people will experience these episodes. 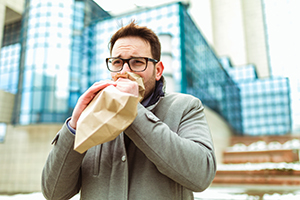 Now that we know how to characterize panic attacks, let’s dive into some possible causes of them.

As anybody who suffers from anxiety knows, it can be brought on by anything and it can’t always be explained. Anything from a traumatic event to stress can cause a person’s anxiety to rise and hence, stir a panic attack.

For Alex Kollen, who first started experiencing these scary events when she was 16,  she sees an increase in the amount of panic attacks she experiences whenever she spreads herself too thin.

As an international relations major at the University of Southern California, Alex’s college experience was anything but a walk in the park. The pressures placed on her because of her grueling major only increased her attack’s frequency.

“Panic attacks occur when I feel I can’t control multiple facets of my life or take too much on and get extremely stressed. My last major one was in college and I had decided to take all my higher level business school requirements all in one semester, intern three days a week, and was volunteering as a teacher where I had to prep lectures once a week,” Alex said.

These demands spun Alex out of control.

“The workload for my classes alone was enough to take on in one semester and it quickly became evident that I just didn’t have the time to do it all. I felt extremely out of control, as I wasn’t performing well in any of these obligations because I was just trying to keep my head above water,” she explained.

While Alex was able to pinpoint what exactly was causing her to have panic attacks, figuring out the cause of them isn’t always possible. Sometimes, there isn’t even just one reason behind them.

Fear, sadness, lack of sleep, you name it! The most random, unforeseen thing can trigger anxiety and when left unattended to, lead to a panic attack. If you or a loved one goes through the upsetting experience of having a panic attack, be patient with them or yourself and gently understand that there isn’t always an answer as to why. And, know that having a “why” isn’t always necessary for a solution.

Just like panic attacks are caused by different, sometimes unexplainable, things for every individual, the outward display of panic attacks also vary.

The girl on my cheerleading team exhibited the stereotypical panic attack symptoms. She started hyperventilating, crying and was unable to calm herself. This is the form of a panic attack that you’ve probably seen portrayed through films or television shows. But, panic attacks can take any number of other forms.

Take Alex for example. She doesn’t begin to lose her breath, but rather, panic attacks cause her to appear frantic and almost manic.

“I can’t concentrate on one thing and feel like I can’t think clearly. That usually then spirals and manifests in different ways because the lack of control you feel causes panic, anger, etc,” Alex says.

There are many other ways panic attacks can appear. Some include bouts of intense anger or irritability, feelings of numbness or a tingling sensation, fainting or sweating. On top of all those, a person may feel a choking sensation or as if their throat is closing, experience extreme confusion, seem detached from reality, feel as if they’re in a dream-like state, have a knot in their stomach or undergo nausea, vomiting or increased heart rate.

All the above are different ways a panic attack can look. But, that doesn’t always mean it’s easy to spot an attack when it’s happening. For my friend on the bus, it was extremely clear that she was dealing with something intense. Other times, symptoms are not so evident.

For Alex, unless you’re close with her and know her moods and personality, you may not realize that her rapid talking or chaotic attitude can mean her anxiety has risen.

Another example is if you have a loved one who often snaps, there’s a chance that instead of just being a difficult person, they’re actually suffering from anxiety. This facet of panic attacks is important to keep in mind so such attacks aren’t just brushed off as something that they are not, but instead can be treated properly.

Just like the cause of panic attacks, anxiety, is treatable, so are its attacks. One option is to see a therapist and use methods of talk and behavioral therapy. There are also alternative therapies, yoga, diet and lifestyle changes, and medication when all else fails.

Psychology Today says that through therapy, 70-90% of patients improve significantly. And, also according to the site, improvements can be made in three to six weeks.

Most importantly, the best way for a person to get help is for them to explore and do what’s right for them.

“I have learned to say no to things; opting to concentrate my energy on only a few tasks at a time. I have learned my limits and being aware of them is how I avoid further anxiety attacks,” Alex said when asked what she does to solve her attacks.

While witnessing or experiencing your first panic attack can be striking, knowing signs, symptoms and treatments can help you, or a person you care about, face these attacks head on in the future.

You can find out more about which cookies we are using or switch them off in settings.

This website uses cookies so that we can provide you with the best user experience possible. Cookie information is stored in your browser and performs functions such as recognizing you when you return to our website and helping our team to understand which sections of the website you find most interesting and useful.

You can adjust all of your cookie settings by navigating the tabs on the left hand side.

Strictly Necessary Cookie should be enabled at all times so that we can save your preferences for cookie settings.

If you disable this cookie, we will not be able to save your preferences. This means that every time you visit this website you will need to enable or disable cookies again.