For the longest time, the stigma associated with mental illness only affected the poor, the old, the sick and healthy, it didn’t discriminate. Hollywood has shone a light on the problem within the entertainment industry as shown by many articles and interviews written about stars opening up and sharing their own struggles with anxiety.

Hollywood has always been a fascination for me. I dreamt of being an actor when I was young. In my mind, celebrities didn’t have any problems. Their lives looked so perfect. Now that actors are uncovering their personal battles with anxiety through the media, they’re just like us–stars with anxiety.

I was standing in line to pay for my groceries the other day and noticed on the front page of Elle magazine was Kendall Jenner. I started thinking about the article I recently read in People magazine about her battle with anxiety. In particular, the incident where she wasn’t able to get on a plane. According to the article, Kendall had her mom Kris attend Milan’s Fashion Week along with her to help cope with her anxiety. Not to feel alone. Reading the article, I felt connected to her as I have suffered from a panic attack while boarding an airplane. It compelled me to research how to contact Kendall, as I did through email, in hopes to let her know about my book and the struggles I had with panic associate with flying on an airplane. 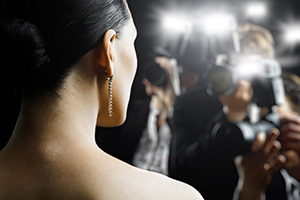 Just to name a few celebrities who share their stories, Johnny Depp is another favorite celebrity who struggles with panic attacks. Even though in the past he has been quiet about his struggles, he is starting to talk in interviews about his anxiety and how therapy has given him tools to cope. In connection with his new movie release Deadpool 2, Ryan Reynolds opens up in a New York Times article about his life long battle with anxiety. He talks about the symptoms he experienced with stomach aches, drinking alcohol to self-medicate, and then turning to therapy to help manage the symptoms.

Singer Adele suffers from panic attacks before she steps on stage to perform and Jennifer Lawrence battled with anxiety as a teenager. The one celebrity that was a surprise to me was Oprah. Huffpost did an article on how Oprah had a panic attack while filming the movie, “The Butler.” She wasn’t quite sure what was happening as she experienced a “numbness” and “speeding” in her body and mind. Oprah just told herself if she didn’t calm down she would be in serious trouble.

With all the exposure related to anxiety and Hollywood, we can hopefully lift the stigma associated with mental illness. Celebrities are just like us, they suffer from anxiety. By opening up and addressing their struggles publicly could probably coerce people to address their battles with anxiety and get some help. To silence shame and take down the walls that keep us in a secret place that isolates us from others who only want connection, understanding, and love.

Written by Melissa A. Woods

This site uses Akismet to reduce spam. Learn how your comment data is processed.

You can find out more about which cookies we are using or switch them off in settings.

This website uses cookies so that we can provide you with the best user experience possible. Cookie information is stored in your browser and performs functions such as recognizing you when you return to our website and helping our team to understand which sections of the website you find most interesting and useful.

You can adjust all of your cookie settings by navigating the tabs on the left hand side.

Strictly Necessary Cookie should be enabled at all times so that we can save your preferences for cookie settings.

If you disable this cookie, we will not be able to save your preferences. This means that every time you visit this website you will need to enable or disable cookies again.